A YEAR OF RESILIENCE FOR PNG

A YEAR OF RESILIENCE FOR PNG

The Marape-led Government has shown resilience in financing its deficit Budget this year with the Internal Revenue Commission (IRC) exceeding its original revenue target for 2021 by K200 million amid subdued economic conditions.

In receiving the cheque, an elated Prime Minister, Marape, commended the Commissioner General and his team at IRC for exceptional performance.

“I am proud of IRC because they could have used covid-19 disruptions as a convenient excuse to perform below the target. They’ve had 40 Covid-19 positive cases at IRC. Covid-19 restrictions did not allow officers to carry out routine compliance activities, and there is a general contraction in the economy. Despite all odds, IRC performed exceptionally well and beyond expectations. For this, I commend them, ” Prime Minister said in a media statement.

He added: “Immediately after taking office in mid-2019, I have urged our public servants and public sector agencies to address complacency and corruption – two of the biggest impediments confronting the public service machinery.  The covid-19 pandemic has tested whether organisations had taken heed of my words. Those that have, like IRC in this case, have risen above the challenges posed by Covid-19 in delivering on its core mandate.”

The Prime Minister urged all other government entities to take this as a challenge to prepare for 2022.

“Our Government is investing in digital transformation at IRC. On Monday, I launched the first-ever online payment portal called ‘MyIRC’ , already online. That is indeed a quantum leap!

“Next year, our Government has allocated K25 million for IRC to procure a top Integrated Tax Administration System (ITAS) and another K12 million to set up a GST Monitoring System at all shops where the GST component will be calculated and wired directly to IRC account.

“This Government is intentional, hence putting the money where its mouth is. We are not a government that spends only, but makes productive investments in increasing our revenue,” PM Marape said.

With digital technology, PM Marape assured that automating many functions and processes would eliminate opportunities for human manipulation and corruption.

“When a cohesive and robust mechanism to collect taxes efficiently with digital technology is established, this will prevent leakages and inevitably boost the collections.

“The Government is confident that only then, the Government will be in a better position to explore a reduction in some of the taxes, including Personal Income Taxes and Corporate Income Taxes.

“That dream is not far away because we have already taken great strides towards it.

“Thank you and Merry Christmas!” 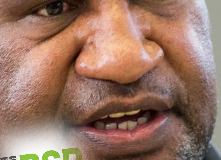