The Health Minister, Jelta Wong has clarified that the Cabinet has awarded a new medicine contract to Borneo Pacific Pharmaceuticals Limited ‘for the year 2022 only due to a shortage of drugs.’

His clarification stemmed from a leaked Cabinet decision document which has sparked national debate on the contract.

In a media statement, Minister Wong said it was awarded by the National Executive Council based on advice from the National Department of Health, the National Procurement Commission and the State Solicitor.

“The provision of healthcare, and importantly the supply of medicines, is one of the core priorities of our Government,” Health Minister Wong reassured the Nation.

“Particularly when faced with the current constraints on global medical supply chains due to the impacts of the COVID-19 Pandemic, our Government has navigated a very complex environment.

“The Department of Health had provided advise that drugs were running out and they made the recommendation for us to procure additional supplies. As such our objective is to ensure the supply of medicines is not impeded.

“There is no way that our government could allow administrative gaps to undermine the procurement of medical supplied into the coming year.’

Mr. Wong said concerns have been raised by respected Member of Parliament as to the awarding of a contract for the supply of Health Centre and Aid Post Kits, and it is right that these questions be asked and properly answered.

“The contact was agreed following the advice of the National Procurement Commission Board and the State Solicitor, with Borneo Pacific Pharmaceuticals Limited, and is now awaiting formal signing by the Governor-General on behalf of the State.

“At the time of this signing a formal announcement will be made on this procurement that will provide Health Centre and Aid Post Kits for which our people are in desperate need around the country.

“In relation to the company, Borneo Pacific Pharmaceuticals Limited, they had been the subject of independent investigation by the National Parliament Public Accounts Committee, Chaired by Sir John Pundari, and subsequently cleared of any and all claims made against them.

“It is important to note that the earlier contracts, that were the subject of investigation, were procured under the previous government.

“Moving forward, the government will be issuing tender documents for the supply of medicines and other pharmaceuticals at the conclusion of this one-year contract.”

The Health Minister said issues being raised now about Borneo Pharmaceuticals appear to be emanating from social media stirring by the Opposition, and he reinforced the importance of not letting party politics interfere with the delivery of healthcare.

“Healthcare should never be a battleground for politics, because it is a vital area of service delivery for each and every government and the people of our Nation.

“Debate on health issues should focus on the facts, not the rumours.

“To this end, any discussion, online and in in mainstream media, should not be about causing disruptions as we are seeing right now, but on what all parties to any healthcare discussion can contribute so as to improve services.

“I welcome the points raised by Members of the Parliament that are based on real concerns they carry, and that are made under their own names. This is different than some members of the Opposition who are more interested in leaking documents and stirring trouble behind fake names of faceless keyboard warrior. 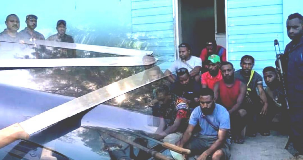