The loan will help PNG to finance its K19.6 billion (A$7.6 billion) National Budget 2021, repay its debts and stabilize the economy.

Thus, the Lowy Institute published on its The Interpreter ‘to finance its deficit, the government first resorted to substantial domestic borrowing.’

“A spending surge aims to steer the economy out of crisis,but high debt and heavy interest pose another risk,” it reports.

Despite the situation, economic commentators project PNG Economy to bounce back.

Nakahara said the loan came with the interest rate of 0.01 per cent a year. The repayment period is 15 years.

“PNG can enjoy a grace period of four years and can begin to pay back the debt after its economy recovers.”

“This K1 billion is the largest ever since the start of Japan’s official development assistance to PNG.

“Since the beginning of 2020, the whole world has been suffering from the outbreak of the Covid-19,” Nakahara said on the newspaper.

“The world economy has also suffered and the PNG economy is no exception.”

“Under such situation, our bilateral relationship between Japan and PNG should remain solid.” 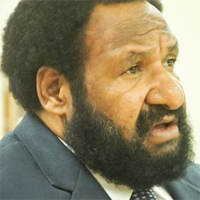