LAE MUST LEAD THE WAY FOR BETTER PNG: PM MARAPE

□ 20 percent of GST Revenue collected in Lae stays back with Lae City Authority, a decision by Pangu-led Government.

LAE MUST LEAD THE WAY FOR BETTER PNG: PM MARAPE

In a media statement, he thanked the people of Lae and Morobe for their continued support of Pangu and added the elevation of Lae MP, John Rosso to Deputy Prime Minister was well-deserved.

PM Marape said this on Friday (May 27 2022) when addressing a massive crowd of thousands of people at Niall Reserve in Lae who gathered to witness launching of Hon. Rosso’s 2022 General Election campaign. 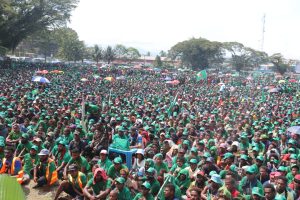 “I want the revolution to change the country for the better to start here in Lae, the home base of Pangu Pati,” PM Marape said.

“Lae is a major city in the country and you deserve the deputy prime ministership of the country.

“I am happy to be here today with the Deputy Prime Minister, Governor Saonu, Hon. Wenge, and all the men, women and children of PNG in Lae.

“You all have won my heart by turning up here today in the green colors of Pangu.

“We are a ‘green army’ ready to revolutionise our country.”

PM Marape also acknowledged the traditional landowners of Lae, the Ahi people, for contributing their land towards the development of PNG.

“I thank the traditional landowners of this city, the people of Butibam and Ahi and other surrounding villages, for allowing PNG to grow through Lae,” he said.

“I also thank the leaders of Morobe, for being part of 101 MPs, for helping to make me Prime Minister in May 2019.

“Before we came in, the country was on the wrong road, with only one or two people benefitting.

“We have now set the country back on the right road which Pangu foresaw in 1975.”

PM Marape said this was evident in the massive developments in Lae, and other parts of the country, over the last three years since Pangu came into office.

The Prime Minister said one of the main reasons for this was 20 per cent of Goods and Service Tax (GST) collected in Lae being paid to Lae City Authority, a decision by the Pangu Government.

He said this was despite the onset of COVID-19 in PNG and other parts of the world.

“This country and Lae City needs better,” he said.

“People should not think about money, believe in political lies, but vote for change for this country.

“My people of Lae City, Morobe and PNG should know that electing leaders is serious business.

PM MARAPE CHALLENGES O’NEILL TO A LIVE PUBLIC DEBATE
By STAFF REPORTERS May 28, 2022

PM MARAPE CHALLENGES O’NEILL TO A LIVE PUBLIC DEBATE
By STAFF REPORTERS May 28, 2022