Opposition Leader of Papua New Guinea, Belden Namah has donated K200, 000 to the churches in his Vanimo-Green District of Sandaun Province.

In a media statement, he said the support was part of project development funds to churches.

Vanimo-Green DDA not only supported two schools with a cheque presentation of K455, 000 for new buses. It also supported churches along the West Coast of Vanimo.

Namah recently told the crowd at Lido Catholic Church his district was the first in PNG giving one-tenth of the DSIP allocation to the Christian churches.

In addition, Namah thanked his DDA for their continuous support to put God’s work first. That is they passed DDA board resolution to give one-tenth portion of DSIP to churches.

While presenting the cheque of K100, 000 each to the two churches, Namah said that these were the two oldest Catholic Churches.

Further, Mr Namah said that PNG Party has three simple policies. That is 10% to Churches from the National Budget, Integral Human Development and Zero tolerance on Corruption.

Furthermore, he said on record he delivered substantively to the district since his first election. That is despite the fact that he spends most of his tenure in office on the Opposition bench.

Churches brought the education and development to Vanimo-Green District. Also, they did to all of PNG. It’s about time we change policy framework to help the church to continuously improve and develop the country.

Lido Catholic Priest Father Sebastian said that it was a timely call. He thanked the MP for the funding which will assist build the Catholic church.

Prosperity of Vanimo Green River Electorate and it’s people depends on good leadership, a leadership that is committed to God.”

The ‘God First Policy’ is very unique. It is a foundation of honest leadership that reflects transparency and accountability.” 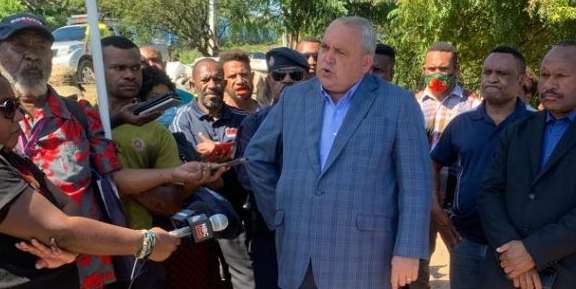