O’NEILL TRIED TO SELL OUT PORGERA MINE IN 2019: PM MARAPE

□ Peter O’Neill shouldn’t tell me how to run the country, because he ran it into recession, even when Porgera was operational, says PM.

O’NEILL TRIED TO SELL OUT PORGERA MINE IN 2019: PM MARAPE

Prime Minister, James Marape says he has not blamed Porgera landowners for the closure of Porgera mine, as claimed by Peter O’Neill.

He said this in response to O’Neill blaming him for the closure.

“Nothing could be further from the truth,” PM Marape responded.

“I addressed a large crowd of thousands of people at Porgera on Monday (June 20 2021), while campaigning for my Pangu Pati candidate for Porgera-Paiela Nixon Mangape, and they all applauded my efforts to give them more for Porgera. 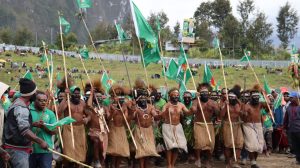 “No-one has blamed Porgera landowners for the continued closure of the mine.

“Peter O’Neill should be ashamed of disrupting our efforts to reopen the mine by trying to bring all parties together.

“He continues to play politics over every development issue, like his questioning the Chinese Foreign Minister’s recent visit, and all our other efforts to develop our country.”

PM Marape said O’Neill was not qualified to talk about Porgera as he tried do things for less national benefit from the mine in 2019.

“Peter O’Neill is the last person who should be talking about Porgera,” he said.

“He knows in his heart as to why he visited the Chinese company Zijin Mining in April 2019, instead of allowing the SML application filed in July 2017 to be dealt with.

“His heart was not in the right place for Porgera, which was why some of us, including Enga Governor Hon. Peter Ipatas,   resigned from his self-serving government in 2019.

“Today we have gained 51 per cent from what was 5 per cent in the old Porgera under Peter O’Neill.”

PM Marape said Barrick and Kumul Mining were putting final touch-ups that would need land owner and Enga Provincial Government endorsement and he had appealed to all parties to expedite this process.

“If Peter O’Neill was in power, he would have sold Porgera out, but under our ‘Take Back PNG’ philosophy, we have reached a win-win deal greatly in favor of PNG,” he said.

“It’s a first of its kind deal, which cannot be compared to Ok Tedi where the operating company BHP had left and there was no legal fight.

“Peter O’Neill must know of us know his conniving tricks and personal interests so well, so much so that we left him.

“We thank God he was not prime minister when we had to negotiate Porgera.

Let me correct his wrong notion of me shutting down the mine: The fact is that the lease expired and the application to renew lease was on the same terms as the last 30 years, so I had to make hard decisions to get back Porgera to negotiate for better terms for our country.

“Finally, Peter O’Neill shouldn’t tell me how to run the country, because he ran it into recession, even when Porgera was open and operating. Look at the records:  the country was negative 0.3 per cent in 2018 in as far as GDP was concerned.

“Over the last three years, even without Porgera, I kept the country alive and going.

“We even grew the economy by K30 billion – without Porgera – compared to Peter O’Neill’s lackluster K35 billion growth over eight years.”