The launch of Enga-Sepik Highway on Friday paves the way for Enga to fulfill its aspiration to become a commercial hub in the Highlands Region.

If former Enga Governor, late Malipu Balakau had been still alive, he would have been the most elated leader to see his dream coming to fruition. Late Malipu once said in Enga: “Po mend lanao lelam ong laliyo len laman. Translation: We will change the course of the wind.”

Thanks to Prime Minister, James Marape and his Government that this vision will be materalised when K8 million worth Karawai to Maramuni road project is complete.

During the launch, PM Marape said his Government was connecting rural Papua New Guinea like never before under its signature ‘Connect PNG’ programme.

He said this on Friday (April 1) at remote Maramuni in Enga, bordering East Sepik, when opening the K15 million 57km Maramuni Road linking Maramuni to Wabag, and launching the Enga-Sepik Highway which will link Maramuni to Karawari in East Sepik.

The Maramuni Road crosses some of the most-rugged and difficult terrains in the country and was done at minimal costs by the Wabag District Development Authority (DDA).

The area is known to be rich in gold and agriculture. Maramuni has huge untapped potential in tourism, however, there was no road and people used to walk to Wabag – which took several days – until now.

PM Marape flew to Maramuni immediately after arriving from Jakarta, Indonesia, where he led a Government and business delegation.

PM Marape overnighted in the remote station before returning to Port Moresby on Saturday.

The Prime Minister announced further funding of K10 million for the Maramuni Road and K8 million to start work on the section from Maramuni to Karawari. 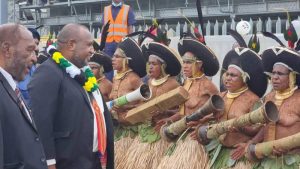 Works and Highways Secretary, David Wereh and representatives from other Government departments and agencies were also present.

PM Marape commended Sir Peter and hardworking Dr. Tom for their vision and foresight for the “forgotten” people of Maramuni.

“We are trying to connect all rural areas right throughout the country,” he said.

“In this year’s Budget, we have allocations for 163 roads throughout the country.”

PM Marape said Maramuni was one of these “missing links” which included Tabubil-Telefomin linking Western to West Sepik, Karamui-Kundiawa in Chimbu, Finschhafen-Lae in Morobe and many others.

“We are trying to connect all these missing links,” he said.

PM Marape said his predecessor Peter O’Neill had concentrated only on Port Moresby at the expense of rural areas like Maramuni.

“Over the last three years, we have spent K15 million on the Maramuni Road – which is not a lot of money,” he said.

“To break down mountains along the Maramuni Road would require K50 to K60 million.

“I want to thank the leader of Enga, especially Governor Ipatas, and Dr. Lino for making it possible.”

PM Marape also commended the construction team for being honest and hardworking to complete the road and avoiding unnecessary expensive contractors.

“I want to thank Dr Lino, Governor Ipatas, the team on the ground including local boys who handled the machines, for putting smiles on the faces of both young and old at Maramuni,” he said.

“This place has gold, coffee and so many other resources.

“However, for so long, we have forgotten them until now.”

PANGU GOVT CELEBRATES ACHIEVEMENTS IN ITS THIRD ANNIVERSARY
By STAFF REPORTERS May 30, 2022

MARAMUNI PEOPLE URGED TO USE ROAD FOR ECONOMIC ACTIVITIES
By STAFF REPORTERS April 3, 2022