-The service will be launched after Easter.

The new public bus service has been delayed for launching till after Easter, City Hall announced today (Thursday).

NCD Governor, Powes Parkop said this is to enable the NCDC Management to put in place a mechanism that will ensure the service is delivered to the highest standard possible from the beginning.

NCDC is committed to delivering a better more efficient and reliable public bus service. Preparation for this service has taken longer than expected as the Commission wants to ensure it starts the service to the highest standard possible.

It is for this reason the launching of the new bus service has been further delayed. It is expected all preparations will be completed soon.

Governor Parkop reiterated that the new service would operate in eight (8) new routes which are not served currently by PMV operators. 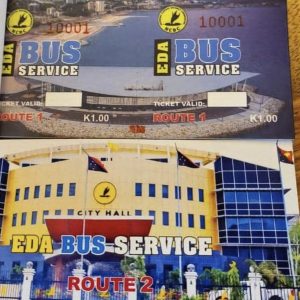 “NCDC has been running bus service for school children in the city and we are confident the city bus service will deliver great outcome for the city and for our people once we begin operation in the first three confirmed routes. The other five is yet to be finalised. I call on city residents and PMV operators to support this initiative and work together with NCDC so everyone can benefit from this service” said Governor Parkop.

During a meeting on Wednesday with the working committee on the proposed Eda Bus Service, acting City Manager, Ravu Frank said from the eight official routes approved by the Road Transport Authority, his working committee has agreed to have three routes to be in operation first once logistics are ready.

“Its actual date for the launch will be announced once all the boxes from the check list are ticked,” said Mr Frank.

The three routes confirmed to be in operation straight after the launch are:

There will be five NCDC buses serving these three routes, the acting City Manager said.

The other five routes will also be finalised and announced for operation once all the logistics are ready, he said.