A group of disgruntled service providers has allegedly burnt down the Central Provincial Government building at Konedobu in Port Moresby, according to sketchy reports.

The reports say delay in payments for services they have rendered to the occupants of the building prompted them to take law into their own hands. 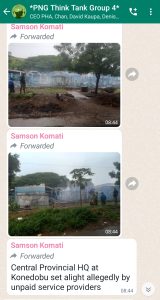 Fire trucks were seen on the scene putting off the fire but their intervention did not help.

NCD and Central Police Command is being expected to make a public statement on this arson case soon.

The story is still developing.